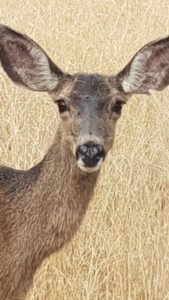 Indulge me for a moment and imagine this: deer grazing, wild geese flying above, dramatic wild American countryside and a meteor shower uninhibited by light pollution overhead. Got it? Now throw in a charming, rustic tiny home and you start to get an idea of this little adventure.

This experience was by far one of my favourites while visiting tiny houses in Oregon and, though it may sound dramatic, it moved me. In fact, I felt like a child in a candy shop. I can’t find the words to describe the experience and do it justice, and the fact that it all happened by chance just blows me away.

A few months back, when prepping for the trip, my mate and I decided we were keen to get out of our comfort zones and get to know some of the locals. We signed up and registered for the Couchsurfing network and had a look around for a verified host.  I came across Pab’s profile (not his real name. I don’t want him to be slammed with Couchsurfing requests).

His eyes were kind, he had a warm and inviting smile and his profile was written in such a way that I instantly wanted to meet him in person.  I sent him a request asking if he would have the time and space for a short stay for us in Eugene.  Part of the Couchsurfing process is to let people know a little about yourself and why you are traveling, so I mentioned our tiny tour.

To my surprise, he not only accepted our request and offered us a place to stay, but also offered to get in contact with a friend of his, Leslie, who had two tiny homes up north. Of course, the response was an enthusiastic yes, please! After a few emails and a Skype chat, Leslie, despite traveling at the time, offered us the use of her very first tiny.

After a 4 am start from Coss Bay, we got to Bend, returned the hire car and switched it for a BEAST

of a camper van (later nicknamed affectionately Beastie) and headed out in search of Leslie’s tiny home.  On our approach to the property, I’m sure I annoyed Cam with far too many repetitive statements like “Wow!”, “This is unbelievable!” and   “Quick, check that out!”, all in the middle of broken sentences when no words could come out. The drive into this property alone was breathtaking.

When we arrived at Leslie’s tiny, I was out of the van exploring before Cam had even parked. The placement of this tiny was even more stunning than the drive in. And to be greeted by a doe and her fawn calmly eating their dinner seemed so fitting. Their curiosity was endearing (sorry, not sorry), but I don’t think they were half as interested in us as I was by this beautiful tiny house. 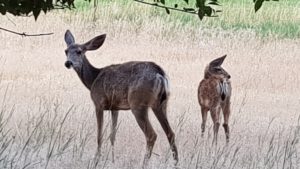 The home looked inviting and I couldn’t wait to get inside for a look. Leslie did warn me that the tiny was “rough”, being her first attempt, but I just thought it was rustic, simple and appropriate for the location it was in. To me, something too polished just wouldn’t have fit with the tone of this wild place.

The interior was painted in a way that brought the colours from of the surrounding cliffs inside, and the exterior colour choice complimented the surrounding plant life. The congruency of this tiny had an effect that I don’t feel that could’ve been achieved with a design that was too crisp, modern or neat and it made the space look much larger than it was. This got me thinking about designing with the end location in mind. Sure, I had thought plenty about a tiny home’s purpose, the environmental footprint, functionality, and style before, but Leslie’s property had me thinking more about how a tiny home can complement its environment. 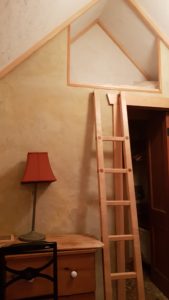 The layout of Leslie’s tiny was simple but functional. The living area had a lounge that you could sleep on that could easily be converted to a larger bed. The kitchen was a basic setup, with two hotplates, a small grill, and a sink. In the centre of the house, Leslie had created a small music room and office space, which tripled as a closest and storage. It worked for the spaced much better than I’d expected. 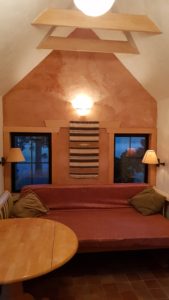 This tiny was a dry tiny, meaning there was no bathroom, but it didn’t really need one. For a few dollars, all the bathroom facilities you could need were approximate 200m away on the nature reserve. The bathrooms were clean and well maintained, so it wasn’t an issue. In general, the facilities for the public in Oregon are far better than any I’ve seen in Australia, so if you were traveling in a dry tiny, with some planning, you could get by just fine.

The walk from Leslie’s place to the bathrooms was really a sight to see. The light and colours of the landscape seemed to change colours along the way. I may not be as big a fan of this setup come winter time, but I’m pretty sure I could get myself to adjust if it meant living in a place like this.

Leslie’s tiny is completely off-grid and powered by solar. It is built on a trailer with a deck built on the front, so more of a temporarily fixed dwelling, rather than a mobile tiny.  It had doors on three sides, with double doors opening on the front deck, and one door on the back end. Each of the doors had steps for easy access. I liked that this tiny was light filled during the day, so there was no need to turn on any lights.

Having had many years of experience building trailers, Cam was my go-to for trailer info while we toured Oregon. His experience was invaluable in spotting the differences between US trailers and what would pass as legal here in Australia.

Leslie’s tiny measured 6.3m in length and was just shy of 3m wide, so it was larger than what could be towed by a standard vehicle here in Australia. Cam informed me that in addition to the base design of the trailer, this one had 8-meter lengths of steel that had been bent and welded from the tow hitch through the chassis to add strength, but it would have also added a substantial amount of weight. 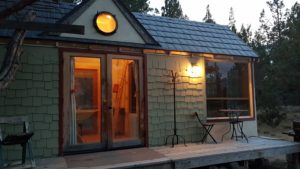 The trailer had a truck hitch, but the trucks in the US are massive compared to ours. If this tiny was built here, it would require extra services to move. Although possible to be towed by a larger vehicle, the design of this tiny would not be roadworthy here in Australia without an extra permit.

The external features of the tiny home, the size, and the weight, although beautiful and well made, wouldn’t wash with Australian road laws at all. The only way I could see this tiny being legally moved in Australia would be to load the whole thing onto the back of a truck to be transported, and that would most likely be a substantial expense. Certainly, something worth keeping in mind if you plan to move your tiny home often.

After a day of sightseeing, meeting deer for the first time, a fright with a snakeskin (Cam is a brat!), and a wonderful tiny home, I crawled into bed and watched a meteor shower, blissed out, exhausted and content.  What a day! One I won’t forget anytime soon.

Big shout out to Leslie for sharing her tiny home with us, especially given that we didn’t meet her in person until the day after visiting her home. So kind! That day was a standout in our Oregon adventure, and it wouldn’t have been possible without her generosity. Thank you, Leslie! Cam and I greatly appreciate having had the chance to experience, not only your home, but your hospitality. I hope our paths cross again soon.